To install Pingouin, you need to have Python 3 installed on your computer. If you are using a Mac or Windows, I strongly recommand installing Python via the Anaconda distribution.

To install pingouin, just open a terminal and type the following lines:

Once Pingouin is installed, you can simply load it in a python script, ipython console, or Jupyter notebook:

For the sake of the example, let's say that we are interested in how meditation can improve school performances in primary school students. If we want to study that, one way would be to split a group of student into a control group and a meditation group, i.e. a certain number of students will be instructed to meditate for 20 minutes a day every day of the week, while the remaining students will be instructed not to change anything to their usual daily routine. This factor is our between-group factor.

Now, we want to examine how meditation significantly improves or worsens the performances over time, starting from the beginning of the school year (August) to the end of the school year. To study that, we are going to asses their school performances at three time points during the year: August (or time = 0 months), January (time = +6months) and June (time = +12 months).


We can print the first lines of our dataframe using df.head():

Now let's take a look at our data using the Seaborn package: 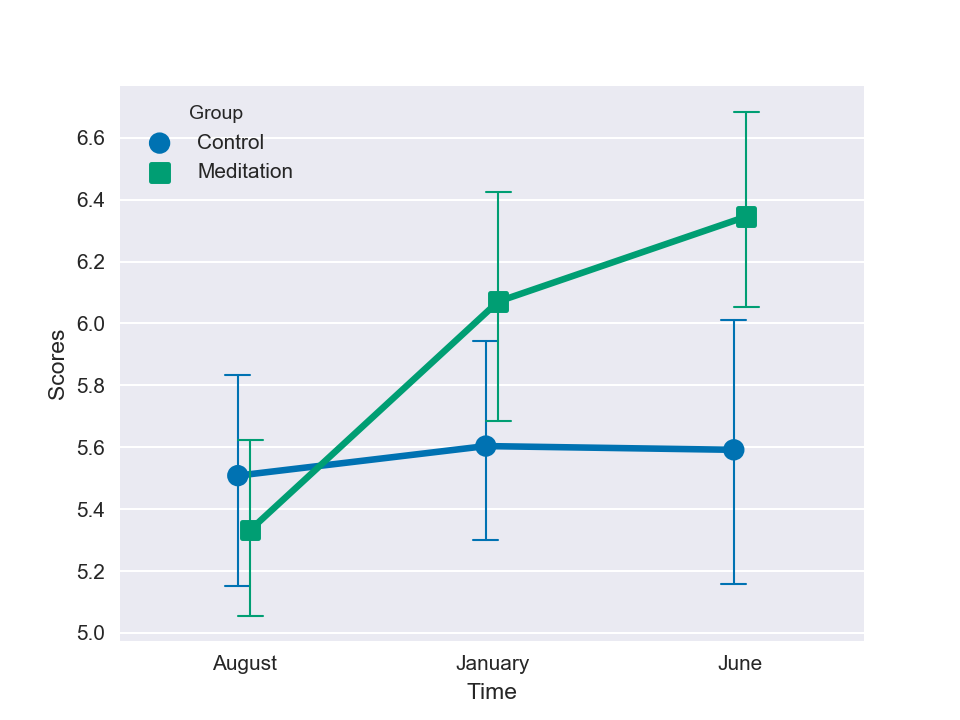 Visually, we can already see a clear improvement of the test scores over time in the meditators group. Let's look at the mean and standard deviations of the data:

To test the significance of this effect, we will need to use a mixed-design ANOVA. That is where Pingouin comes into play. We are going to use the mixed_anova function with the following input arguments:

However, this does not tell us which specific contrast is actually significant. For this reason, we need to perform post-hocs tests on the interaction. This can be done very easily using the pairwise_ttests function:

which gives us (note that for display purpose I removed some rows and columns from the original table):

Our visual impression is therefore confirmed: there is a significant increase in test scores in the meditator group 12 months after the beginning of the experiment (T=-2.7, p-unc=.008, Bayes Factor = 5.593). The corrected effect size (Hedges g) is approximately 0.70 and can therefore be considered, according to Cohen's rule of thumb, as large.

If you have a large number of groups and/or measurements, you might want to correct the p-values for multiple comparisons. This can be done very easily using the padjust argument of the pairwise_ttests function:

If one subject has one or more missing observations (for example, no tests scores in January), this subject will need to be removed from the ANOVA and post-hocs analyses. This is done automatically by the two aforementionned Pingouin functions. However, if your data really has a lot of missing values, you may want to consider alternative analyses methods, such as linear mixed-effects modelling, which better accomodates for missing data (see the excellent lme4 package in R).

On another note, Pingouin also works well with unbalanced design (i.e. different number of students per group). Please find an example in the full script of this tutorial (link above).

Other ANOVA functions in Pingouin