In this tutorial, you will learn how to calculate correlation between two or more variables in Python, using my very own Pingouin package.

To install Pingouin, you need to have Python 3 installed on your computer. If you are using a Mac or Windows, I strongly recommand installing Python via the Anaconda distribution.

To install pingouin, just open a terminal and type the following lines:

Once Pingouin is installed, you can simply load it in a python script, ipython console, or Jupyter lab:

The correlation coefficient (sometimes referred to as Pearson's correlation coefficient, Pearson's product-moment correlation, or simply r) measures the strength of the linear relationship between two variables. It is indisputably one of the most commonly used metrics in both science and industry. In science, it is typically used to test for a linear association between two dependent variables, or measurements. In industry, specifically in a machine-learning context, it is used to discover collinearity between features, which may undermine the quality of a model.

The correlation coefficient is directly linked to the beta coefficient in a linear regression (= the slope of a best-fit line), but has the advantage of being standardized between -1 to 1 ; the former meaning a perfect negative linear relationship, and the latter a perfect positive linear relationship. In other words, no matter what are the original units of the two variables are, the correlation coefficient will always be in the range of -1 to 1, which makes it very easy to work with.

For the sake of the example, I generated a fake dataset that comprises the results of personality tests of 200 individuals, together with their age, height, weight and IQ. Please note that these data are randomly generated and not representative of real individuals.

The personality dimensions are defined according to the Big Five model (or OCEAN), and are typically measured on a 1 to 5 scale

First, let's start by calculating the correlation between two columns of our dataframe. For instance, let's calculate the correlation between height and weight...Well, this is definitely not the most exciting research idea, but certainly one of the most intuitive to understand! For the sake of statistical testing, our hypothesis here will be that weight and height are indeed correlated. In other words, we expect that the taller someone is, the larger his/her weight is, and vice versa.

This can be done simply by calling the pingouin.corr function:

Let's take a moment to analyze the output of this function:

How does the correlation look visually? Let's plot this correlation using the Seaborn package:

Pairwise correlation between several columns at once

For simplicity, we only display the the most important columns and the most significant correlation in descending order. This is done by sorting the output table on the p-value column (lowest p-value first) and using .head() to only display the first rows of the sorted table.

The pairwise_corr function is very flexible and has several optional arguments. To illustrate that, the code below shows how to calculate the non-parametric Spearman correlation coefficient (which is more robust to outliers in the data) on a subset of columns:

One can also easily calculate a one-vs-all correlation, as illustrated in the code below.

There are many more facets to the pairwise_corr function, and this was just a short introduction. If you want to learn more, please refer to Pingouin's documentation and the example Jupyter notebook on Pingouin's GitHub page.

As the number of columns increase, it can become really hard to read and interpret the ouput of the pairwise_corr function. A better alternative is to calculate, and eventually plot, a correlation matrix. This can be done using Pandas and Seaborn: 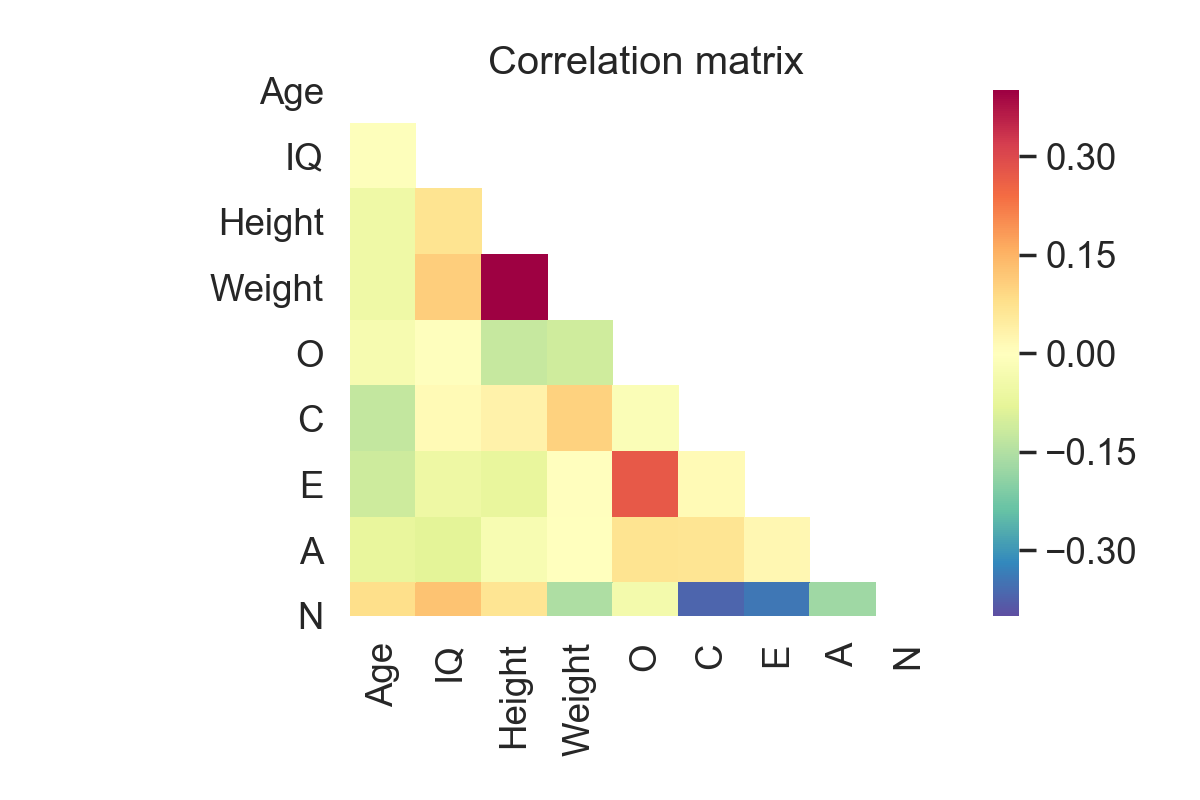 The only issue with these functions, however, is that they do not return the p-values, but only the correlation coefficients. Here again, Pingouin has a very convenient function that will show a similar correlation matrix with the r-value on the lower triangle and p-value on the upper triangle:

Now focusing on a subset of columns, and highlighting the significant correlations with stars: