Welcome to this first tutorial on EEG signal processing in Python!

We are going to see how to compute the average power of a signal in a specific frequency range, using both Welch and the multitaper spectral estimation methods. This tutorial is mainly geared for neuroscientists / sleep researchers with some basic knowledge of EEG signal processing. 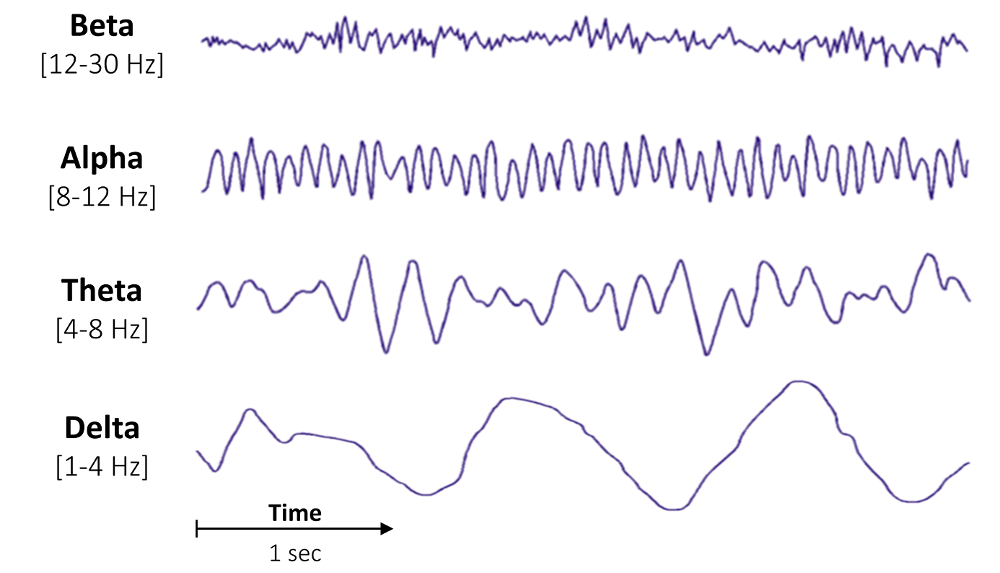 This implies the decomposition of the EEG signal into frequency components, which is commonly achieved through Fourier transforms. The almost invariably used algorithm to compute the Fourier transform (and arguably the most important signal processing algorithm) is the Fast Fourier Transform (FFT), which returns, for each frequency bin, a complex number from which one can then easily extract the amplitude and phase of the signal at that specific frequency. In spectral analysis, it is then common to take the magnitude-squared of the FFT to obtain an estimate of the power spectral density (or power spectrum, or periodogram), expressed in (micro)-Volts2 per Hertz in the case of EEG data.

Although a myriad of analyses can be performed from the power spectral density, I am going to focus here on a very simple one: the average band power, which consists in computing a single number that summarizes the contribution of the given frequency band to the overall power of the signal. This could be particularly useful in a machine-learning approach, when often you will want to extract some keys features from your data (and have a single number that could summarize a particular aspect of your data).

The average bandpower is also a very relevant metric for sleep research because it allows to differentiate between the different sleep stages. For instance, deep sleep is characterized by its predominance of slow-waves with a frequency range comprised between 0.5 to 4 Hz (i.e. delta band), which reflects a synchronized brain activity. Conversely, wakefulness is characterized by very little delta activity and much more higher-frequencies activity. Therefore, if you were to compute the delta bandpower for both deep sleep and wakefulness, the former would be very high and the latter very low. See for yourself below:

For the sake of this tutorial, please find below a 30-seconds extract of real slow-wave sleep from one young individual. The sampling frequency is 100 Hz and the channel is F3.

Time to open your favorite Python editor! If you are new to Python, I strongly recommand using Jupyter Lab. Loading the data is fairly easy:

Let's take a look at the data:

In order to compute the average bandpower in the delta band, we first need to compute an estimate of the power spectral density. The most widely-used method to do that is the Welch's periodogram, which consists in averaging consecutive Fourier transform of small windows of the signal, with or without overlapping.

The Welch's method improves the accuracy of the classic periodogram. The reason is simple: EEG data are always time-varying, meaning that if you look at a 30 seconds of EEG data, it is very (very) unlikely that the signal will looks like a perfect sum of pure sines. Rather, the spectral content of the EEG changes over time, constantly modified by the neuronal activity at play under the scalp. Problem is, to return a true spectral estimate, a classic periodogram requires the spectral content of the signal to be stationnary (i.e. time-unvarying) over the time period considered. Because it is never the case, the periodogram is generally biased and contains way too much variance (see the end of this tutorial). By averaging the periodograms obtained over short segments of the windows, the Welch's method allows to drastically reduce this variance. This comes at the cost, however, of a lower frequency resolution. Indeed, the frequency resolution is defined by: $$F_{res} = \frac{F_s}{N} = \frac{F_s}{F_st} = \frac{1}{t}$$ where \(F_s\) is the sampling frequency of the signal, \(N\) the total number of samples and \(t\) the duration, in seconds, of the signal. In other words, if we were to use the full length of our data (30 seconds), our final frequency resolution would be \(1 / 30 = 0.033\) Hz, which is 30 frequency bins per Hertz. By using a 4-second sliding window, we reduce this frequency resolution to 4 frequency bins per Hertz, i.e. each step represents 0.25 Hz. 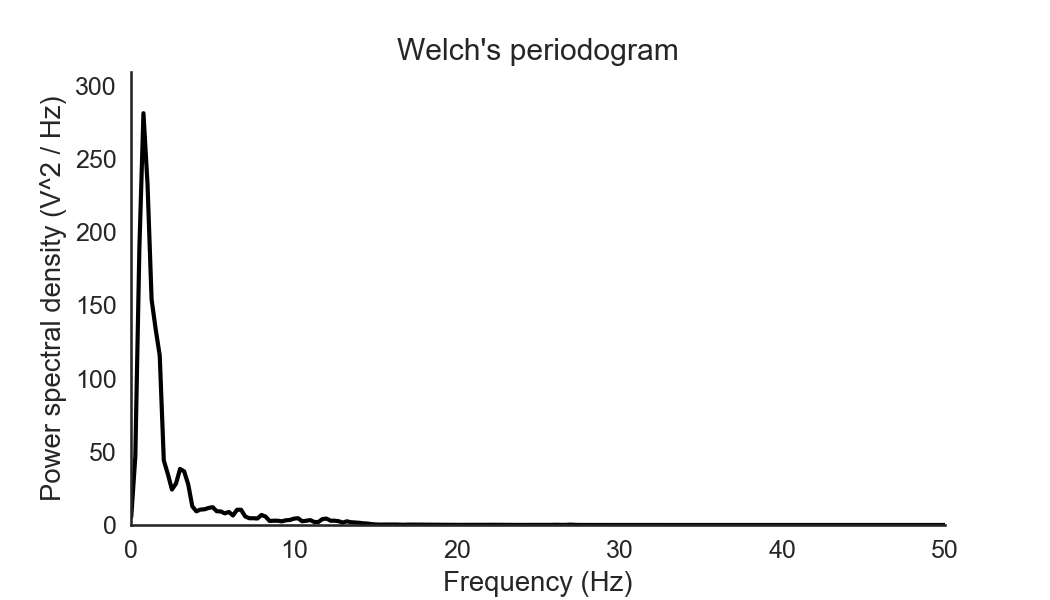 Now, before computing the average delta bandpower, we need to find the frequency bins that intersect the delta frequency range. 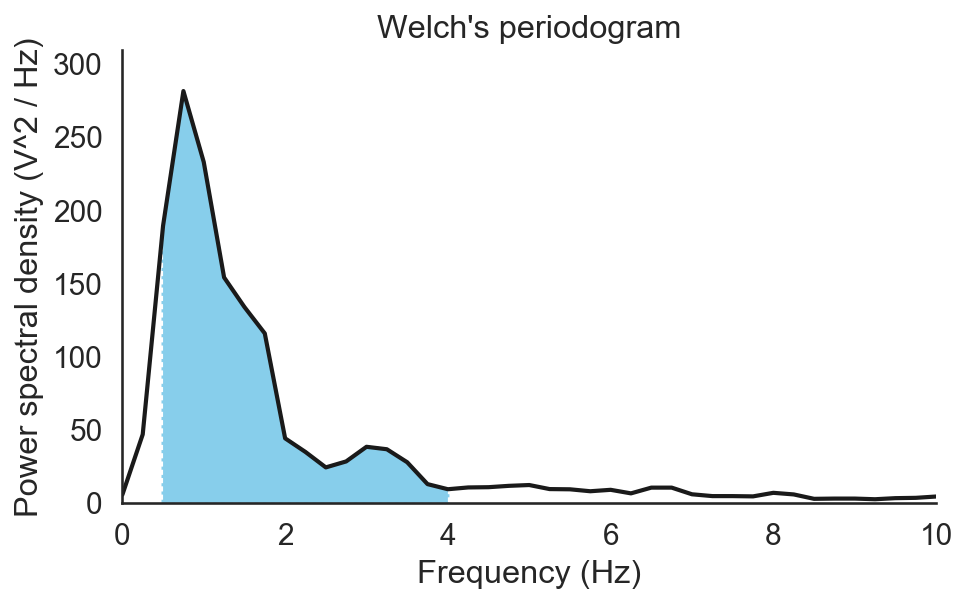 The absolute delta power is equal to the blue area of the previous plot. As there is no closed-form formula to integrate this area, we need to approximate it. This is commonly achieved using the composite Simpson's rule. The idea behind it is actually very simple: we decompose this area into several parabola and then sum the area of these parabola. Note that this could also be done using trapezoid (trapezoid rule) or rectangle (as in the Matlab bandpower function), but parabola typically give better estimates.

In practice, rather than reporting the absolute band power, one may want to express the power in a frequency band as a percentage of the total power of the signal. This is called the relative band power. It can be calculated very easily from the above:

In other words, 78.7% of the total power of the signal is contained in the delta frequency band.

The function below is a generalization of the above which can be used to easily get the average absolute or relative power in a specific frequency band. It is very similar to the Matlab bandpower function, with the exceptions that it uses a Welch's periodogram instead of a classical periodogram, and it approximates the area using parabola instead of rectangles.

It is also very common to report the ratios between two frequency bands. For instance, the delta / beta ratio is a well-known index of slow-wave sleep quality. When computing ratios between two bands, it is important to control that the window length of the periodogram is the same for the two bands. Indeed, if you are using a different window length for the two bands, this will result in two different periodograms and the ratio will therefore be meaningless.

To understand how it works, I really encourage you to read this paper by Prerau et al. (2017) that explains very well what is multitaper and how sleep research and sleep medicine could benefit from it. Another source that was useful for me was the Matlab documentation on Multitaper spectral analyses.

In a nutshell, the multitaper method starts by filtering the original signal with a set of optimal bandpass filter, called Slepian sequences (or DPSS). This filtering is done by convoluting the original signal with the Slepian sequences. Second, a classic periodogram is calculated for each of these new filtered (or "tapered") data and the final spectrum is then obtained by averaging over all the resulting periodogram. The real strength of the multitaper method comes from the fact that the Slepian sequences are orthogonal to all others and therefore the tapered signals provide statistically independent estimates of the underlying spectrum. In other words, each filtered signal will highlight one specific aspect of the spectral content of the signal.

The multitaper spectral estimation method is implemented in the MNE-Python package. In the following example, I adapted the bandpower function that we have created previously to add the multitaper method.

Let's try our new function with the code below. One advantage of the Multitaper method compared to the Welch's method is that we do not need to specify a window duration as it will basically compute the periodogram on the whole signal. Since we are using the full length of the signal, the frequency resolution of the multitaper estimate will be 1 / 30 = 0.033 Hz.

The results are very close to the one obtained using Welch's method. This should remain true as long as your data are not too noisy. However, if you are working with noisy data, the multitaper method will always provide a much more robust spectral estimation than Welch's.

The multitaper is more computationally intensive than other methods. In the example above, the multitaper method was about 300 times slower than the Welch's method. Using 30-sec of data sampled at 100 Hz, the difference in the time of execution was about ~100ms. Now, imagine that you have several hours of data and several channels sampled at 1000 Hz; what was barely perceptible on our 30-sec data could turn into a difference of several hours (e.g. 1 min for Welch, ~5 hours for the multitaper). This is definitely something that you may want to consider when deciding which method to use.